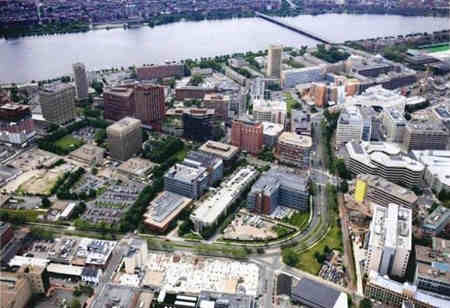 Welcome to the third issue of Appraisal Insights! We’ve launched this newsletter to share customer stories and illustrate the power of real estate appraisals to provide valuable property and market insights.

Pictured is Kendall Square in Cambridge, where life science companies and biomanufacturing buildings near MIT and Harvard continue to proliferate. In the early 1960s, the neighborhood, much of it empty, was slated to be home to NASA. Then JFK was assassinated and LBJ shifted the space exploration center to Houston. In the late 1970s, science companies seeking lab space began coming to the cleared out neighborhood. Life science and biomanufacturing is now the predominant use, but there are also apartment towers, restaurants, retail shopping, a movie theater, and in the winter, an 8,400 square foot outdoor skating rink.

Russell and Tatiana Dupere came back from a soccer tournament to find a leaking water heater had flooded their basement. They went to repair the damaged rec room and found cracks in the foundation. Their house was built in 1990. But the cement foundation was deteriorating.

Another couple in nearby East Longmeadow was all set to sell their home, which was built in 1992. The buyer’s inspector found the foundation’s concrete had spider-webbed and was crumbling. They sold for $200,000 less than what they had agreed to.

The culprit in both cases: pyrrhotite, a mineral that reacts with water and oxygen and expands. The slow motion process destabilizes foundations and makes replacing them a necessity. Insurance typically fails to cover the loss.

Officials estimate more than 35,000 homes in Northern Connecticut and Hampden and Worcester counties in Massachusetts have tainted concrete in their foundations. Everything has been traced back to one source: Becker Quarry in Willington, CT, which sold pyrrhotite-contaminated stone through sister company Joseph J. Mottes Concrete from 1983 until 2017. The companies agreed to stop selling the product at the request of Connecticut authorities. Both went out of business.

Officials estimate the average cost to replace a foundation tainted with pyrrhotite is $185,000. Connecticut lawmakers created a $100 million insurance fund to begin tackling the problem house by house. US Representative Richard Neal, the Chairman of the House Ways and Means Committee, helped secure the funds.
Distribution of the funds is slated to begin later this month.

In Massachusetts, homeowners from Wales, Holland, Brimfield, Monson, East Longmeadow, and Longmeadow recently shared stories of crumbling foundations with local news outlets. Massachusetts lawmakers have begun to address the issue by having foundations tested. State Sen. Anne Gobi, D-Spencer, and State Sen. Eric Lesser, D-Longmeadow, are putting together a commission to come up with a long-term solution.

So far the calamity is more prevalent in Connecticut, where state law mandates that sellers must disclose the possibility of tainted concrete. Because there is no such law in Massachusetts, mortgage lenders and realtors are justifiably concerned. Some banks are telling appraisers to scrutinize foundations poured between 1983 and 2017 and report signs of deterioration. Realtors who are selling newer homes are attempting to find documentation to prove that JJ Mottes did not pour the foundation. Usually such records are hard to come by.

Ice tongs I came across in the attic of an old farmhouse. The owner’s dad told me that ice from a nearby pond was regularly harvested.

In May 2018, Russell Dupere, the homeowner with the flooded basement, told Longmeadow’s Board of Selectman the story of his home’s crumbing foundation. On a video available on YouTube, he said tests proved his large brick Colonial’s cement foundation was made up of 25% pyrrhotite. It is expected to cost $325,000 to replace. Work has already begun.

Longmeadow Selectman Richard Foster said the issue is being called “a slow motion disaster.” Estimates for repair for all affected Connecticut homes is $1 billion. Dupere said it was important to bring the issue public. “One by one, people are foreclosing quietly,” he said. “That’s not a good situation.”