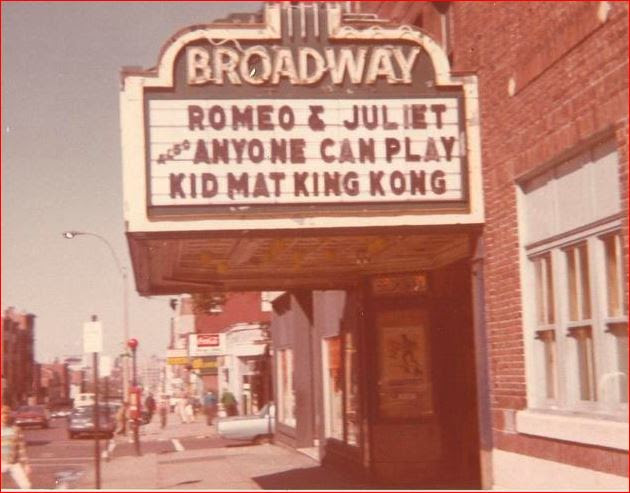 Welcome to the sixth issue of Appraisal Insights! We’ve launched this newsletter to share customer stories and illustrate the power of real estate appraisals to provide valuable property and market insights.
Recent appraisals that we’ve written or are working on include:
*A mixed use building in East Boston with a ground level restaurant and apartments above.
*A group home in Wilbraham.
*An office condo in North Andover near Merrimack College.
*An industrial warehouse in Woburn.
*A retail store strip in Somerville.
*An office condo in South Boston.
*A retail building under construction in Greenfield.
*A mixed use building in Lowell with a ground level laundromat and 10 apartments above.

Boston’s Changing Face: The picture above, taken circa 1968, is the marquee for South Boston’s Broadway Theater. The long vacant building is being developed into 42 condominiums or apartments. Plans include a shared roof deck and 42 underground parking spaces. The back portion of the building along Athens Street has been demolished and is being replaced with a six-story, 44,000-square-foot addition. The old theater’s lobby will reportedly become a lobby for the complex.

Changing the Way Cities are Organized

By Linda Sakelaris, Staff Writer
Plans to create micro apartments and other new housing options in Boston could pick up steam if area zoning uncertainties are addressed.
The Boston real estate market is poised to embrace innovative “compact” living spaces now being constructed throughout the country. However, the patchwork of variable zoning regulations in towns and cities throughout the area makes development difficult.
Municipalities “have been over-restricting housing development relative to need,” according to a recent report by the Massachusetts Smart Growth Alliance and six other organizations, which surveyed multi-family zoning activity for 100 Boston-area municipalities.
By 2030, as many as 50,000 new residents are expected to enter Boston, a city already experiencing an affordable housing shortage. City planners intend to handle the influx by creating 69,000 new housing units, in part by redesigning existing dense structures to form smaller, micro apartment units.
To accommodate this vision, the city has lifted its square-foot minimum mandates. Studios can now be under 450 square feet (SF), one-bedrooms under 625 SF and two-bedrooms under 850 SF. Boston launched a compact living pilot program in November to show that with the proper design, a 1,000-foot two-bedroom unit could be comfortably reduced to 600 SF, according to program plans.
Development has been stymied in part by zoning laws. Currently, Massachusetts lawmakers are examining a century-old state law that requires a two-thirds vote of a municipal body to authorize zoning changes. Proponents of the existing law say it too easily allows a vocal minority to block a project, and seek instead a simple majority vote. Other politicians fear that with a simple majority method, towns would build luxury and market-rate housing rather than affordable housing.
Developers, meanwhile, are looking for a coordinated approach among city, state and community leaders on zoning, permitting, and other regulatory matters before going live with this new national trend.

Micro apartments, many of which will be leased, not only provide affordable housing, with access to transit, amenities and other city offerings, but also represent the 21st century “village” housing approach. Developments will include community space such as lounges, laundry facilities, study areas, gyms, and rooftop gardens.
The village concept meshes with the recent change in civilization, points out a study in Sweden. Two key factors are driving the future: digitalization and urbanization. Urban areas attract a large number of young workers, which have dense electronic social and professional networks. These residents do not seek large housing, but are more influenced by on-demand transportation, delivery services, open spaces, and other urban offerings. Older Americans shedding single-family homes are also expected to be drawn into urban micro units.
This change in resident demand will change the way cities are organized, states the Swedish study, which was produced by the Royal Institute of Technology and the Department of Real Estate and Construction Management. Micro unit apartments are often furnished by the developer or landlord with space-savers such as Murphy beds and convertible seating. Use of modular design and panelized construction could help reduce cost. The theory behind the micro unit is that personal space is minimized without reducing livability and shared community space fosters more personal connectivity.

Developers and investors are interested in micro units for several reasons:
· Units are generally established in prime urban locations in cities like Boston, where the tech industry attracts the millennial workforce.
· Demand for micro apartments is expected to be strong from young professionals as well as empty nesters. Micro units are increasingly used by tourists as Airbnb rentals, a positive factor for a tourist-rich city like Boston. Overall occupancy rates could be stable.
· Square-foot rental rates for micro-units can be higher than for traditional apartments, resulting in attractive yields.
· For redesign developers, expansion of the existing number of units can maximize per-square-foot profitability.
· For investors, financing for micro-units can be hard to obtain due to the small size of the unit. A large down payment may be needed, according to Mashvisor.
· Micro units have become attractive for new investors, who can get in for less money. Also, two micro units could be purchased for the price of a single traditional property, spreading the risk across multiple rentals.
BostonMicro housingSpringfieldWorcester
Share This
Related Posts